Cooking With Beer: Tips and Tricks 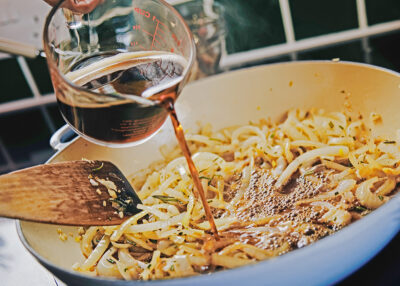 Since you already know how to perfectly pair your food and beer, let’s take it a step further. Here are tips and tricks to cook with the hoppy beverage to complement and bring out a variety of different ingredients, flavor profiles and textures.

This is an easy one, but if you don’t like drinking a particular beer on its own, you won’t like it in your meal! Try cooking with a beer you already really like. It also helps to have a general understanding of the main types of beer (Ale, Lager, Stout, India Pale Ale, Pilsner, Sour Ale etc.) and what overall flavor notes they are bringing to the table.

Light beers (pale ales and pilsners) tend to be easier to work with because their milder flavors and lower alcohol content pair well with most foods. Stouts and porters are more full-bodied, so they require a little more finesse when it comes to incorporating them into your cooking.

Speaking of finesse, you’re going to need it when pouring beer into any meal. Beer can be bitter, which can quickly overpower a dish. It’s much harder to reduce a beer’s flavor once you’ve over-poured than to add some more later on. Plus, the longer you cook beer, the stronger the flavor becomes. This is all the more reason to start light and not underestimate a beer’s potency.

Beer is a natural tenderizer because of the enzymes that will help break down tough fibers in meat. But there’s not a single type of beer that works across all meats. You’ll need to think about pairings here too. Dark beers complement robust meats like beef, while lighter beers go with seafood, poultry and pork. Beer can also help caramelize the outside of seared meats and add flavor to barbecue sauces.

It’s not all meat and potatoes either. Beer is yeasty, which makes it easy to add to bread and baked goods. Due to its carbonation, it helps with leavening while giving extra lift and texture. It should be freshly opened and room temperature. This allows the foam to disappear and more of that carbonation to be released. Porters and stouts are the best place to start. The dark roasted malt lends flavors of cocoa and coffee. You can also explore with citrus and coriander notes in lagers or Witbiers.

You Get What You Pay For

You don’t have to break the bank, but know what you put in is what you’ll get out. A bottom-of-the-barrel beer will taste like it, no matter how much cheese is surrounding it. And remember as you cook, flavors will reduce and intensify so there’s nowhere to hide.

These tips and tricks are not hard and fast rules. Generally, you can swap beer for water or stock in any recipe because those ingredients add very little taste. A nice beer allows you to tap into another level of flavor! Experiment with different pairings in the kitchen until you’re ready to debut it on the main table.

Let us know what recipes have been working for you! Cheers!