Hops 101: What They Are and How They Taste in Your Beer 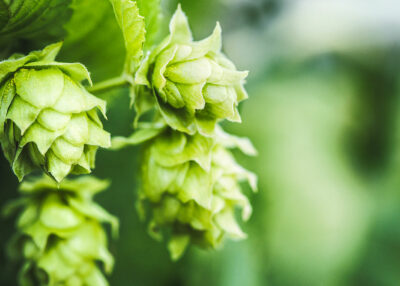 Hops are heroes at Druthers Brewing Company. They give beer its signature bitterness, aroma and flavor. Let’s hop in!

Cone-shaped flowers from the female hops plant, Humulus lupulus. A cousin of cannabis (sans the THC), this flowering perennial has tiny yellow pods called lupulin hidden inside that contain resin and essential oil acids that are highly sought after by brewers. More on that later!

Hops are grown across the globe, but thrive in moderate climates with rich soil and lots of sunshine. They actually prefer the same conditions as potatoes. The leading potato-growing states in the US are also among the major hop-producing areas. As a climbing plant, hops are trained to grow up trellises in fields called a hop garden or hop yard.

Now that you’ve got the basics, it’s time for a little bit of science.

How They Are Used in Beer

Hops are part of the core four when it comes to essential beer ingredients. It’s malt, water, yeast and hops. The aforementioned lupulin in hop cones contains resins and essential oils that are responsible for a beer’s bitterness, aroma and flavor.

In terms of brewing, there are two extremely general ways hops are used: for bittering and for aroma. Hops are added at different times during the boiling process to achieve these different results. Bittering hops have higher levels of alpha acid and are added at the beginning when brewers need to release bitterness and balance the sweetness of the malt. The more alpha acids in your hops, the more bitter the beer will be. You can always find out how bitter a given beer is by checking out its International Bitterness Units (IBU). Aroma hops have lower alpha acid levels and are added later because the longer aroma hops are boiled, the less flavor and character they give off. So brewers don’t want to over boil these because they don’t want to lose that nuance. The smell usually gives away a highly aromatic beer.

Within the two types, there are many, many varieties that brewers leverage in varying degrees to bring out certain characteristics for the desired bitterness, aroma and flavor in a given beer.

Here are some of the major hop groups as well as popular varieties within them. Beer labels often note the hops used. Impress your friends by knowing some basic tasting notes about a given hop.

This hop type has grassy, lemony, woodsy and even tea-like notes. It’s most often used in beer styles of English origins. Beers like Canterbury Jack and London Pride. Not a widely popular hop, this type does still have a dedicated following.

Big, bold and citrusy flavors are the telltale traits of this hop type. Brewers use it to give beer a highly aromatic piney, fruity and resinous flare, the mark of nearly all American IPAs.

It’s true that we owe a lot to hops for giving beer its signature taste, but they are also the reason it stays fresh for as long as it does. Hops act as a preservative that limits the growth of spoilage bacteria in beer, which lengthens the shelf life and gives us more time to enjoy good beer.

Speaking of, Druthers Brewing Company offers many hoppy happenings. Our Pineapple Pale Ale features citrusy Amarillo hops, while our All-In is a very hoppy American-style IPA with a bitter finish.