Meet Märzen: The Beer Style That Gave Us Oktoberfest 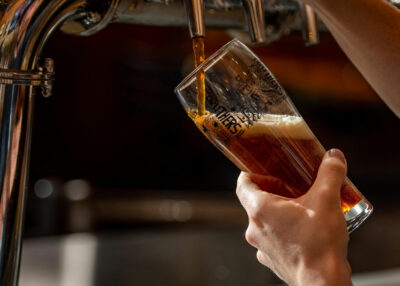 Beware the Ides of Märzen

In the 16th Century, a Bavarian law prohibited brewing beer from April 14th to September 28th. This was in place because most brewery equipment was made from wood at that time and would pose a fire risk during the hot summer months.

As a result, Märzen or Märzenbier was brewed in March (hence the name) and stored in caves to keep cool and last until the fall. The original beer had a higher ABV and more hops, which helped preserve the beer longer. Though brewed in spring, the beer has always been associated with the onset of autumn and celebrations around that time.

The celebration that kicked it all off was in 1810 when Prince Ludwig of Bavaria married Princess Therese of Saxony-Hildburghausen on October 12. The couple threw a huge celebration in Munich, which was open to nobles and commoners alike. This started a tradition that eventually became Oktoberfest. Märzen, which was widely available at the time, became commonly known as the Oktoberfest beer.

We do have to issue a warning though: Not every Oktoberfest beer is a Märzen, especially in the ever-experimental craft brewing world. Märzen beers are lagers. They will generally be thinner and crisper when compared to an Oktoberfest beer, which are heavier ales. Märzens also usually include Munich malt (named for the Bavarian capital). The malt gives the beer its amber color and rich, sweet taste. A standard Märzen is typically under 7.0% ABV. Oktoberfests are usually not Märzens because they’re ales that don’t use Munich malt and are too strong.

At Druthers, you can try our Oktoberfest, which is a Märzen. It’s a traditional German-style lager with a toasty malt flavor and just enough hops to balance. This amber beer weighs in at 6.8% ABV. Remember, this is the original party beer, made famous at the longest-running beer festival in the world so it will taste better enjoyed among friends.