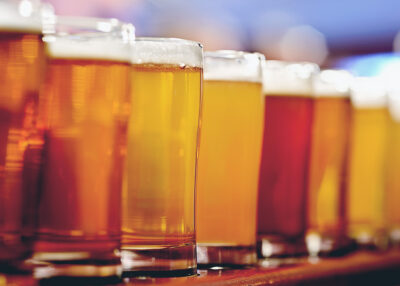 An IPA is an India Pale Ale. By definition, it is simply an overly hopped pale ale. That’s because hops have preservative oils that kept the brew fresh on the voyage from England to British colonies in India in the 18th century (when beer was not produced there).

Intense hop aromas or fruity flavors are the hallmarks of an IPA, but the exact flavor profile can be hard to pin down because there are many variations on the market.

These will be the closest to the original IPAs that were exported to the British colonies. They exclusively use British hops like Fuggles and Goldings, which give them an earthy and light citrus character. An English IPA will have a very dry, hoppy finish with an ABV between 6% and 7%. They are less common in America due to using only British yeast and hops.

Originally crafted in California, the West Coast IPA uses American “C” hops like Cascade, Citra and Chinook. This gives it a piney aroma with citrus and earthy characteristics. They tend to be less dry because they often use a crystal malt, but significantly more bitter.

A fairly new style on the scene, an East Coast IPA differs from West Coast varieties based on the yeasts used. California brewers use clean, almost flavorless yeasts, to encourage drinkers to focus more on the hops, whereas East coast brewers use mutated, complicated British yeast. These yeast strains produce more complex flavors and smells as they ferment the sugar. You will usually detect notes of stone fruit, banana and tropical fruit. This flavor boost allows brewers to use fewer hops, which makes the beer less bitter but cloudier and hazier in appearance.

This type (also known as an Imperial IPA) is a direct result of brewers and drinkers getting a little too used to the high bitterness of IPAs. The people wanted more hops! But to balance that out, brewers used more malt, which created a higher alcohol content. These beers have a strong hop flavor with floral, piney and citrus notes. The minimum ABV is 7.5%.

And just as brewers and drinkers got used to the bitterness of a Double IPA, they wanted even more hops! These big aroma and extremely dry brews can reach 12% ABV or higher. Though they are hugely popular, they are not for casual drinkers.

Speaking of casual drinkers, Session IPAs are for you. These are much lighter in body when compared to traditional IPAs, but still pack a strong hoppy aroma. The bitterness is more balanced with an ABV that never goes above 5%. Brewed to ensure you can enjoy multiple beers in one sitting or session.

You may be thinking how can it be a pale ale when it’s black? You’re onto something. A Black IPA is also known as a Cascadian Dark Ale after the region of America where it was first invented. The idea behind the style is a beer that looks like a stout with the hoppy aroma of a typical IPA. The darker malts lend roasted flavors that contrast with the floral, citrus and piney flavors of the hops. When done well, it can be a totally unique and delicious experience.

This style generally implies a Belgian yeast has been used, which gives the brew clove and spicy notes that are commonly found in Hefeweizens and Belgian Tripels. They tend to be lighter in color with a more complex flavor and higher in alcohol than a typical IPA.

A variation of a fruited IPA that has gotten so popular it warrants its own category. The aroma and flavor largely come from the grapefruit, which also lends acidity and amplifies the bitterness. It has a lively, bright and refreshing taste!

You can boost your IPA IQ right at Druthers Brewing Company! We offer our All-In IPA year-round. It’s a hoppy, American-style India pale ale with Amarillo, Centennial and Horizon hops. German Vienna and Munich malts are there to provide balance. There’s also our No Excuses New England IPA. It’s brewed with pale Munich and wheat malts, oats and a lot of hops! The big fruity resinous aroma has notes of pineapple, citrus and pine. These two don’t fall neatly into the 9 types, but are extremely hop-forward. Our last suggestion is the seasonal Pineapple Pale Ale. It’s a fruited IPA with the perfect blend of pineapple and citrusy Amarillo hops.