Witbier vs. Hefeweizen vs. Wheat Beer 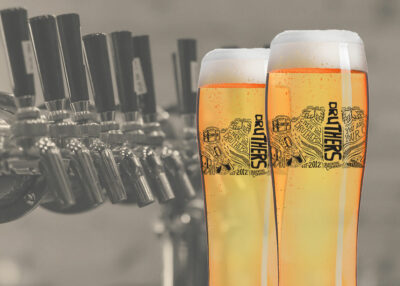 Though these are all part of the wheat beer family and brewed with a large portion of wheat, that’s where most of the similarities end.

Discover the differences in origin, brewing process and taste.

Brewed in Belgian monasteries as far back as the 14th century, witbier was made from specific combinations of herbs and/or spices to balance the sweetness of the malt. But as hops started to replace bittering herbs in the late 1800s and into the 1900s, witbiers risked extinction until milk-man Pierre Celis put it back on the map.

In 1965, Celis built a small brewery in his shed and perfected a witbier recipe to great success. He eventually brought it to Austin, Texas in 1989, which was a huge hit for the emerging craft beer crowd. Not long after, Allagash White and Blue Moon were released as the industry’s most notable witbiers.

Translating to “white beer” in English, witbier is typically brewed with a mix of pale barley malt, unmalted wheat and oats for a creamy mouthfeel. It is a spiced beer with coriander and citrus notes and a small amount of lactic acidity. The style is cloudy and golden in appearance because of its unfiltered process. Witbiers have a distinctive bready flavor and usually fall in the 4.5 to 5.5% ABV range.

Originating in the 1520s in Bavaria, Germany Hefeweizen is a type of weissbier. The style actually managed to exist outside of the Bavarian Purity Law, which stated that beer could only be made with: barley, hops, water and yeast. This was possible because those in charge, the Dukes of Wittelsbach, made an amendment called Weissbierregal or the “right to brew wheat beer” that allowed a single brewery to make weissbier. This was the case until the final Duke of Degenberg died without an heir. Then Duke Maximilian I expanded production to more breweries because he felt there was economic potential in weissbier.

In 1856, Georg I. Schneider was the first commoner granted the right to brew wheat beer. Today, G. Scheider & Sohn make one of the most popular versions. Hefeweizen came to America with German immigrants in the 19th Century, but it wasn’t until the 1980s when craft brewers really started to embrace the style.

Translating to “yeast wheat” in English, hefeweizen is essentially an unfiltered wheat beer with yeast in it. The style typically features up to 50-60% wheat in the mash, which gives a hefeweizen added bitterness and a signature head of thick white foam. Hefeweizens are also known for their banana and clove, even hints of vanilla or bubblegum, flavor and aroma. It is cloudy and slightly white in appearance, but with that thick foamy head. Hefeweizens are crispy, sweet, fruity and highly drinkable and usually fall in the 4.0 to 7.0% ABV range.

The newest addition to the family is the American Wheat Beer. In the 1990s, craft brewers were inspired by the fruit and spice forward, unfiltered wheat beers of Bavaria. Except they didn’t have access to the specialty Bavarian weizen yeast, so clean fermenting American ale and lager yeast was used instead. This removes the banana or clove flavor, which is specific to the weizen yeast strain. American wheat beer is typically made with about 30% malted wheat while the rest is pale 2-row malt. The style tastes bready, doughy, or cracker-like with a straw yellow to golden hue and usually fall in the 4.0 to 5.5% ABV range.

You can further your wheat beer family education right at Druthers Brewing Company! We offer Against the Grain Hefeweizen, which is a special Bavarian-style wheat beer made with beech wood-smoked malt. The unique yeast used to ferment this malty brew produces fruity and spicy aromas reminiscent of bananas and cloves. There’s also the Brevity Wit Witbier, which is a Belgian-style wheat beer spiced with sweet orange peel and coriander as well as hops. Made with 40% raw wheat, the flavor is light and refreshing.